Apart from the fact that the National had been postponed twice and therefore was something of a novelty, this year we were also helping out. Essex LRC were setting the RTV. 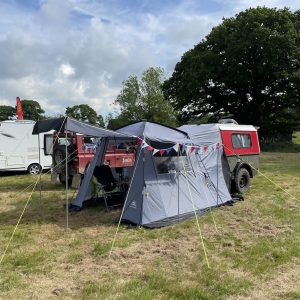 There was lots of work to do on site as the woods had been affected by the many storms we have had in the past two years.

Not only was it the National Rally it was also the Queen’s Jubilee weekend and there were lots of flags and bunting in evidence around the site. BosunCam was no exception. We had decorated our camping pod.

The weather during the week before the event had been changeable and when we had some rain it was difficult to get about. Bosun was stuck in a hole at one point and had to wait for recovery.

Due to fact we were assisting Mark Pycraft to run the RTV we sadly didn’t get any pictures of that event.

However we did get some of the CCV and the Comp. Safari. We hope you enjoy them.